The agony of choice: The amount of 14 beer tents at the Oktoberfest plus four more on the so called ‘Oide Wiesn’ really doesn't make it easy to spot the one, where you find yourself among kindred spirits and where you never want this crazy spectacle to end. In order to support you with your choice, we put together a tent guide that prepares you for the Oktoberfest jungle. Every beer tent has its own story to tell, so you find the one fitting your story.

'Ozapft is' & where it all starts

It’s 21 September 2019 and you don’t want to miss, when Munich’s mayor Dieter Reiter pronounces the words ‘Ozapft is’ after tapping the first beer? So, you have to go for the Schottenhamel Festzelt. But be aware, that you need to come early … really early … if you are not one of the lucky ones, who have gotten a reservation. And until midday, there is even no serving of beer. Just after the twelve gun salutes have been fired, in all tents the beer starts to flow in streams. After the first day came to an end, the crowd is mixed by partying students with networking politicians and managers.

Rumor has it, they have the best beer around. Bavarian’s traditionalists mingle with those who spurn any other beer besides the Augustiner – especially when it's poured directly from wooden barrels. Not a real party tent, but definitely a great choice for the one’s who like to dive into Bavarian culture. 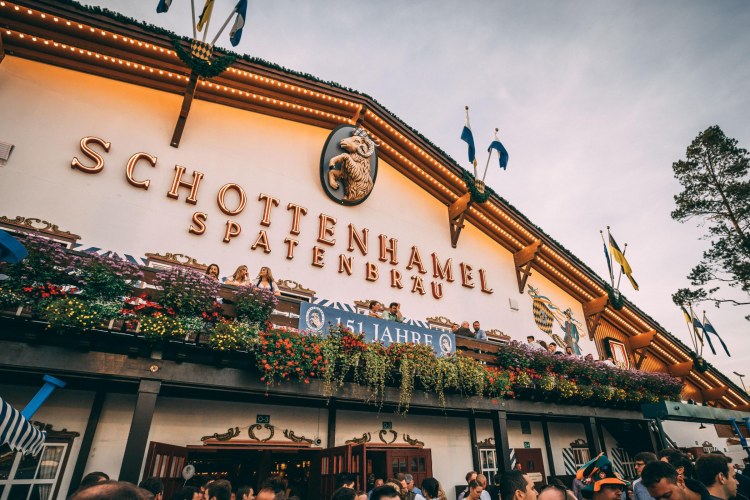 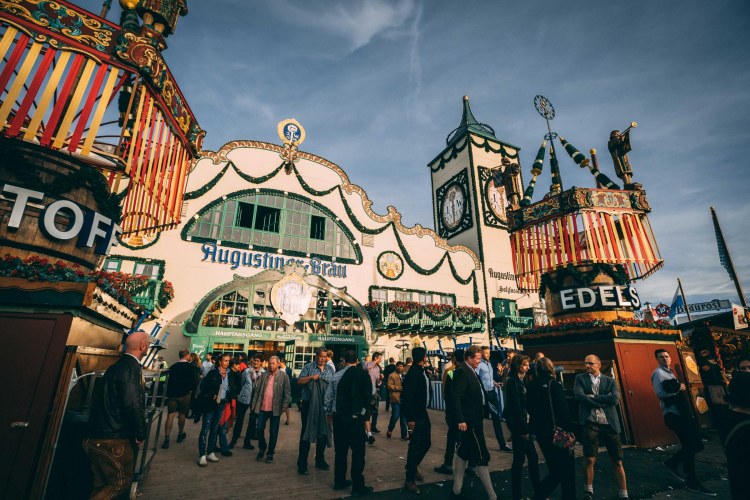 Party under Bavarian’s most beautiful sky

Celebrate under Bavarian’s blue sky. Either you drink under the beautifully painted ceiling designed by Rolf Zehetbauer or in case of a sunny day, the ceiling can even be opened. But, if the Hacker Festzelt is your choice, make yourself ready for some young people quite motivated to party. Little hint – Hacker is known for its tasty Radler. As it’s not on the menu, just order a bottle of lemonade and mix it with beer. Thus, you’ll get through the day and with some water in between, even through the night.

Home to all international visitors

‘In München steht ein Hofbräuhaus’ is a song line and of course sung especially loudly in the Hofbräu Festzelt. Due to the famous Hofbräuhaus in the historic center of Munich, it’s well-known by all international visitors. Most of which are either from Italy or Australia. So, if you like to train your (drunken) English pronunciation, you're ready for a hell of a party and rather a fan of cultural interpretations than cultural reality, it’s the place to be. In any case it will be an unforgettable experience. 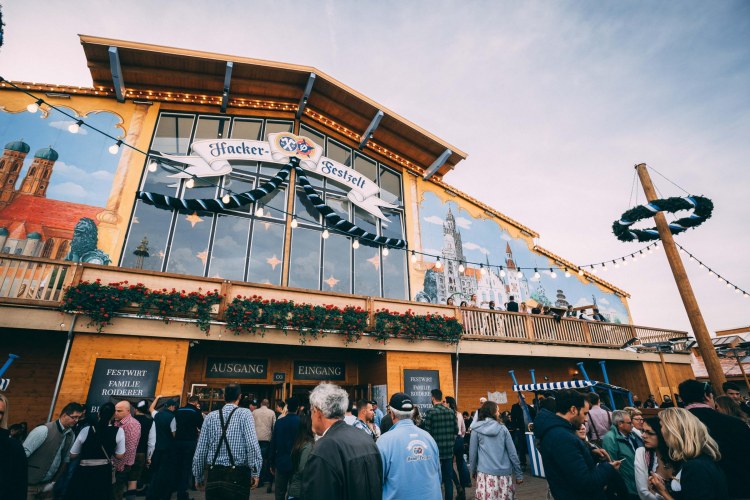 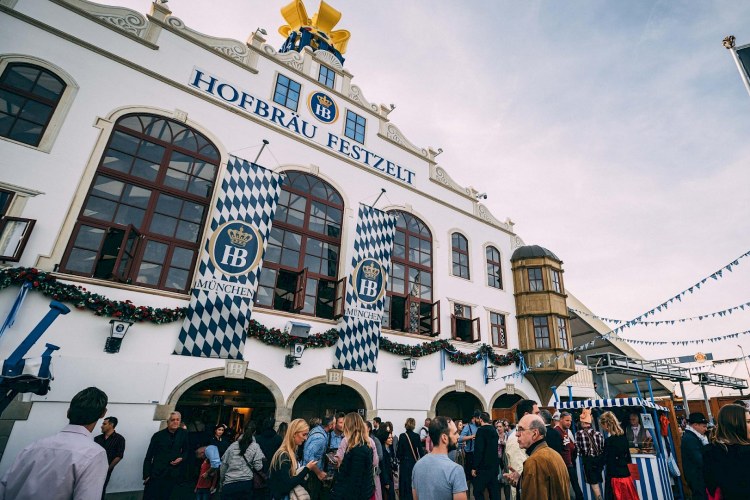 Party with the lions

The easiest tent to find is definitely the Lowenbräu with its lion sitting on a 37 m high tower. And the lion isn't bored at all up there. Every now and then, he takes a sip from its big beer mug and roars ‘Löwenbräu’ across the festival area. Moreover, this tent is also home to Munich’s football club TSV 1860 München, as they also have the king of the jungle as their mascot. Beside fans and players, you mainly find party people with all nationalities.

Long experience how to do beer festivals right

The oversized Paulaner Maßkrug floats high above almost everything of the Oktoberfest. Mainly visited by the locals, the Winzerer Fähndl is a beautiful mixture between tradition and a festive ambience. By the way, Paulaner also hosts the popular Nockherberg Starkbierfest in spring, which starts the overall beer festival season each year. Therefore, they are well experienced how to entertain a crowd. 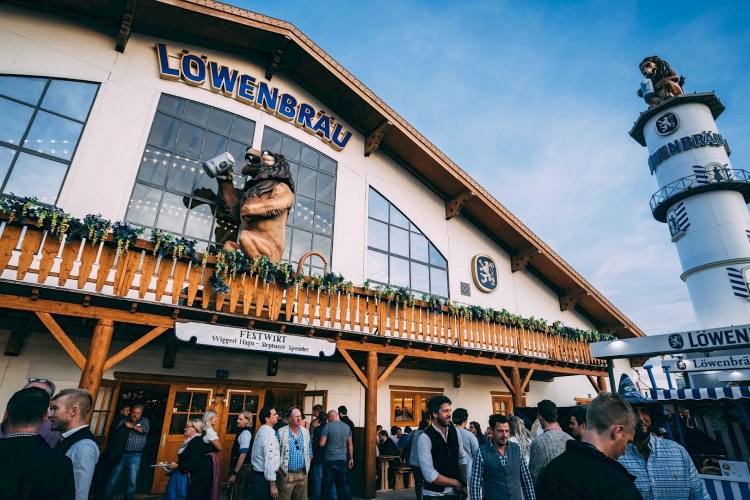 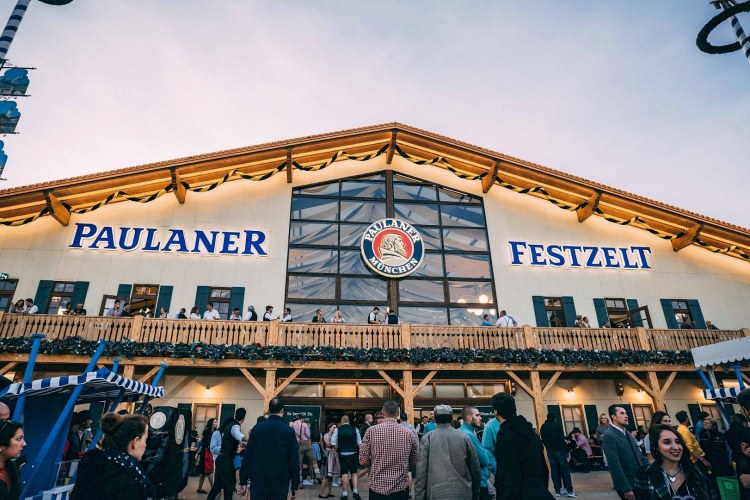 See and be seen

You’ve always dreamt of a picture with some FC Bayern Munich stars or you just bought yourself a Dirndl worth a small car. Join a beer table next to some celebrities, drink champagne from jugs and feel just as important, because see and be seen is the motto of the Käfer Wiesn Schänke.

Once where the Hippodrom was located, since 2014 the Marstall is to be found. It’s beautifully decorated and also frequently visited by celebrities. However, dancing on the benches is not a thing. The fact that the Marstall-Festzelt moves with the time and tries to differentiate with the traditional tents is proven by its organic and vegan food offer. 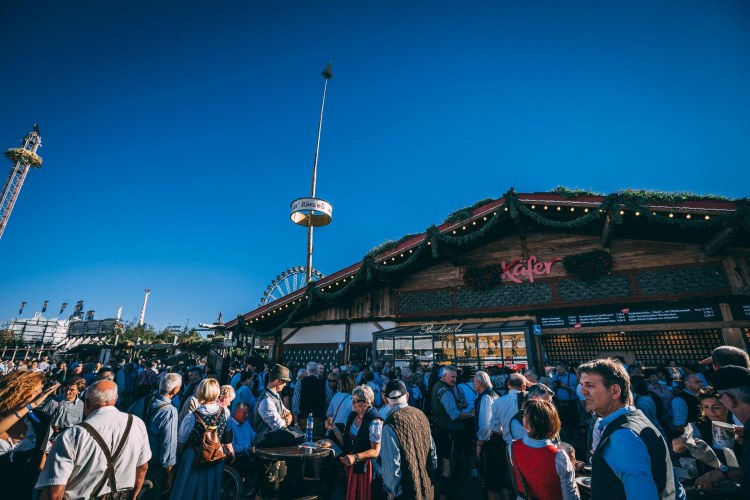 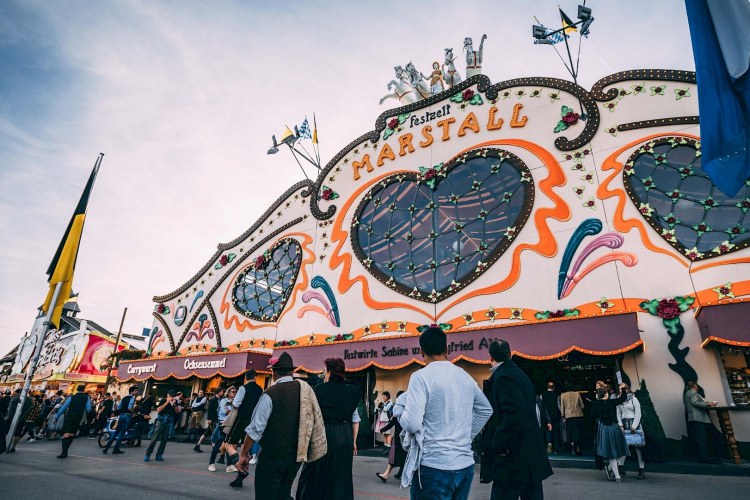 One of the most popular tents for all Oktoberfest insiders, as the Schützenzelt really knows how to create a great atmosphere. As not everyone can down liters of brew, in the Schützen-Festzelt you get beer as well as spritzer. Make your way in the direction of the big Bavaria statue and it’s the last one located in second row.

Fancy wine instead of beer

Even one might think that a wine tent is quite unusual, you usually can find one on every beer festival. Instead of the common beer tent furnishing you dance on comfortable wooden benches and the Bavarian 'Helles' is exchanged by tasty red, white, rosé and sparkling wine as well as wheat beer. Therefore, the Weinzelt offers a great alternative and it's especially popular with female visitors. 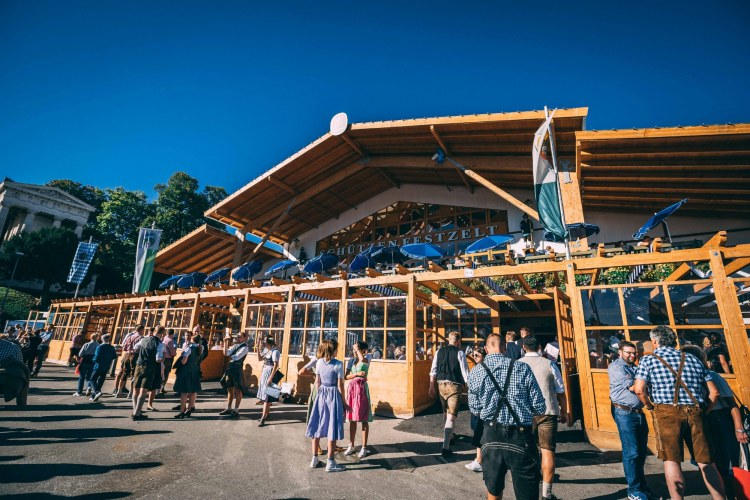 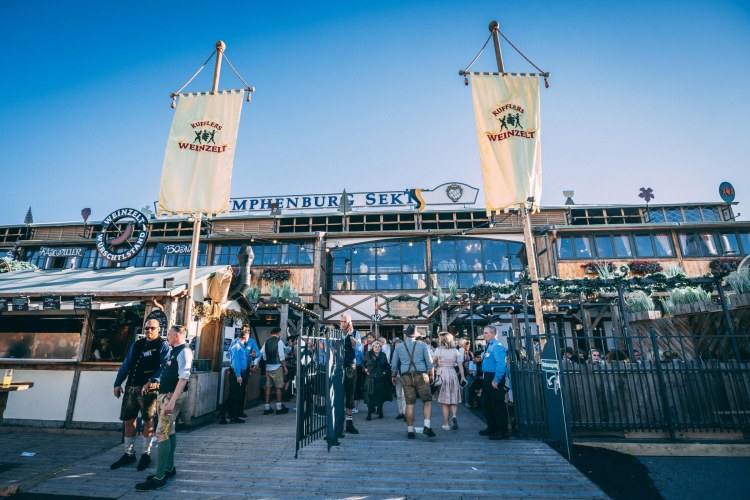 Good chances to get a seat except on 'Gay Sunday'

The Bräurosl combines a nice vibe with many available seats, which is why it’s a good hint for late risers. If queues are growing in front of most other tents, you still have a good chance to get into the Bräurosl. But there is a big exception: On the first Sunday of the Oktoberfest season – the ‘Gay Sunday’ - it becomes a Mecca for the LGBTQ scene and is fully crowded by all Oktoberfest lovers from the gay community.

After the Gay Sunday at the Bräurosl, a second party highlight for the LGBTQ scene takes place on the second Monday at the Fischer-Vroni. But no matter on which day you come, you should not miss the Steckerlfisch (grilled fish on a stick). 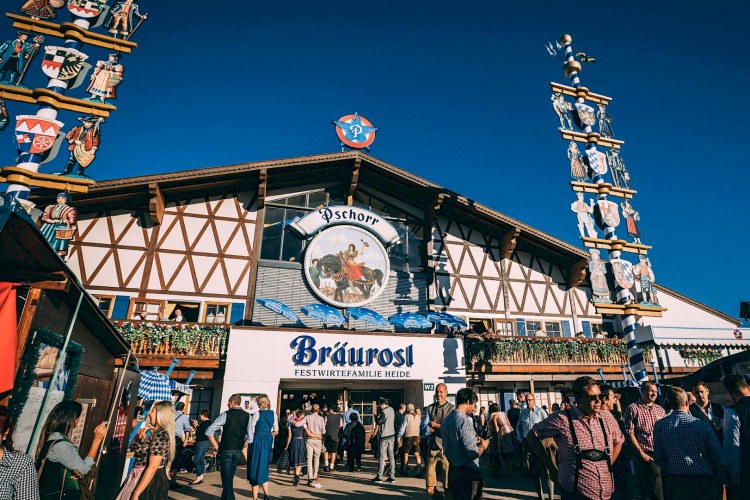 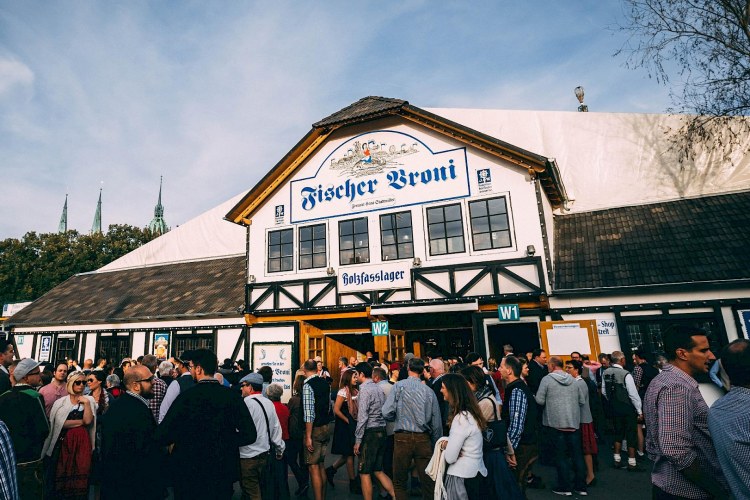 Already for 135 years, this tent serves delicious ‘Ochs am Spieß’ (ox on the spit) and not too little of it. During the Oktoberfest about 100 oxen are getting grilled each year. With its delicious food and local visitors, the Ochsenbraterei is a great choice for families and all who don’t seek a crazy party. If it's already full, just head over to the Armbrustschützen-Festhalle, which is a great alternative.

Travel back in time to the Oktoberfest of the past

A new world opens up on the Oidn Wiesn. Walk through the gate for € 3 euros admission fee, which separates chicimicki and long queues from an Oktoberfest lost in time. Where only a few tourists go astray, there are four more, albeit smaller tents and historic rides to be found. In the afternoon you can see grannies dancing waltzes with their husbands. Children can run around freely without parents following them out of fear to lose them in the crowd. A special tip is the Herzkasperlzelt, where you can watch great musicians and regionally known bands for free. 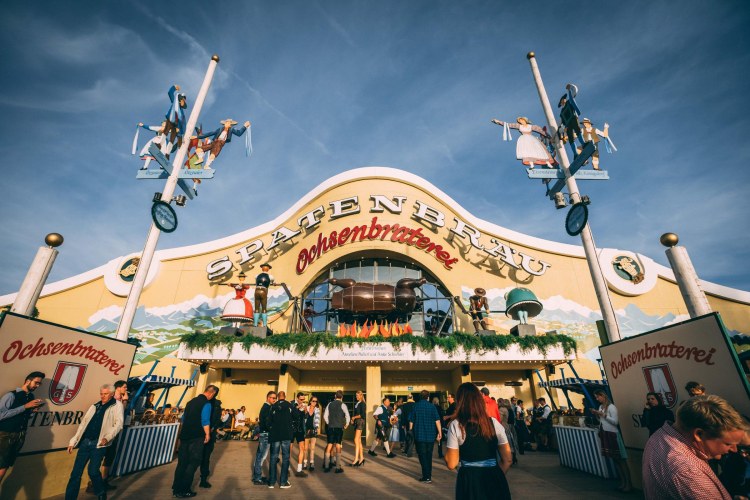 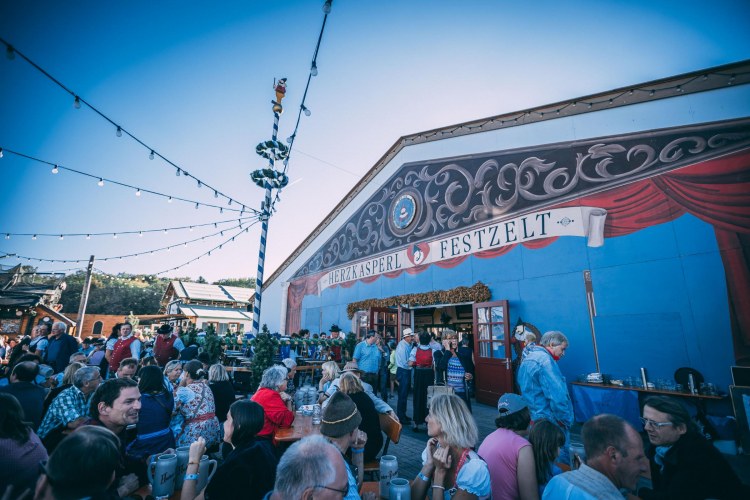 How to Oktoberfest right 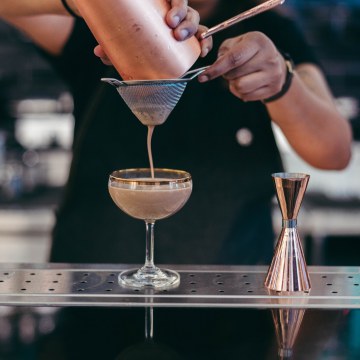